Confessions of the Fox, by Jordy Rosenberg. One World, 2018 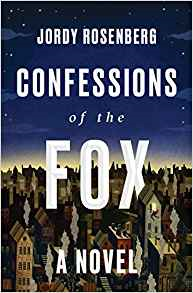 There are a lot of layers going on in this book, so many that I suspect I’m not educated enough to even notice. It’s a story within a story; it’s a wild adventure story and also a statement about how people of color, the queer and the trans people have been erased from history. It also mentions colonialism, privacy issues, Marxism, women’s rights, and I’m sure lots of other things that I missed.


The first narrative is that of Dr. R. Voth, a transman in academia who comes across an old manuscript at the university library’s used book sale. When he reads it, he discovers it’s the biography of Jack Sheppard, who was a real historical person who attained legendary status. The date on the manuscript is 1724, and as Voth reads and transcribes it, he puts numerous footnotes in it. Some are just to let us know what the antique slang means, but as the story goes on, the footnotes take on a more autobiographical status and tells us Voth’s own story, which is even more convoluted and much more depressing. They also become very political in nature.


Jack’s story starts with him as P, a young girl sold into slavery to a furniture maker. Shackled to their bed at night, Jack learns to pick locks with ease, and by his teens is using his nights to explore London. Wearing male clothing and tightly binding his breasts, he escapes his owner and lands in the room- and the arms- of Bess Khan, an Asian sex worker. His adventures include running from both the police and the local crime boss, avoiding the plague, and a truly horrifying gender confirmation surgery. Despite the odds against them, Jack and Bess determine to be together. Despite all the other reviewers calling Jack ‘trans’, I swear he is intersex, identifying as male. This group of people seem even less understood than trans people.


There are so many characters that at times I couldn’t keep track of who was who- this wasn’t helped by having the two narratives weaving in and out of each other. Did I enjoy the book? Yes, a great deal. But a lot of the political references seemed grafted crudely on, rather than being a smooth part of the story, and that made them rather jolting- and not in the mind-opening, good way. It felt at times like I was reading an early draft, rather than a polished product. Because of that, I can only give it four stars.

Neither of these things influenced my review.
Posted by Laurie Brown at 2:04 PM