A Line Made by Walking, by Sara Baume. Houghton Mifflin Harcourt, 2017 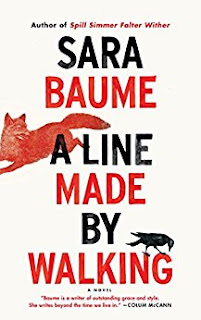 Frankie is twenty five going on twenty six. She’s an artist, who has so far not managed to make a living from her art, only making a living “around” art, working as a dogsbody at a gallery. She has a serious case of depression and a moderate case of OCD. When she finds herself unable to do anything but laying on the moth-eaten carpet in her bedsit, she finally manages to call her mother for help. She proposes that she be allowed to stay in her dead grandmother’s house in the country, which is for sale. Her mother agrees, but only if Frankie will agree to see a counselor. Which she does… once. She refuses meds and does not return.

We follow her as she spends time in the Irish countryside, bicycling and walking and taking pictures of dead animals. It’s for a new project she’s thought of, and it has rules. She cannot cause the animals death, she cannot move the animal- it must be photographed exactly as she found it. She frequently tests herself on her knowledge of art history, recalling various pieces that are real; enough information is given that it’s very easy to look them up online and follow her line of thinking. Most are conceptual art pieces, though, and so a bit diluted by not seeing them in person.

There is not a lot of action in this novel. It’s the story of one person’s battle with mental illness, and how it makes her interact with the world, as she undergoes nearly a complete breakdown. It’s also the story of how being an artist can change how you see the world- how art can be found in the most mundane of things. She’s helpless in the world that most of us inhabit- she has no idea how to use a washing machine- but she sees the details in her landscape with extreme intensity. In the end, we know that she must make her own way in the world, not bend herself to other’s ideals, and we know that art will probably save her.

Neither of these things influenced my review.
Posted by Laurie Brown at 1:17 PM