The Ocean at the End of the Lane, by Neil Gaiman. William Morrow, 2013 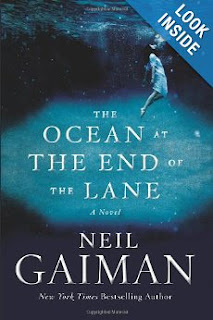 An unnamed, forty something man returns to the small Sussex town he grew up in for a funeral. With an hour to kill, he finds himself back on the lane he lived on when he was seven. It seems that the Hempstocks still live on the farm at the end of the lane; this was once the home of his first friend, eleven year old Lettie Hempstock. He only knew her for a few days, however, before she had her going away party and left for Australia to live with her father. But as he sits by the duck pond, he suddenly remembers: that’s not what happened. Not at all. And he remembers a lot more, too.

The narrator’s family (also unnamed; they could be any family) has fallen on hard times. Right after our hero’s seventh birthday party- to which no one shows up- they take in a boarder to help pay the mortgage. An opal hunter- whose first act is to accidentally run over the boy’s new kitten, he displaces the boy from his room, forcing him to share space with his little sister. This boy is a resourceful loner; he explores the land and reads a lot. But he’s not a miniature adult; he’s afraid of the dark and knows that asking adults anything is pretty useless. The opal hunter isn’t there long, though; one night he takes the family car, drives down the lane to the Hempstock farm, and kills himself with carbon monoxide. This is when the boy meets Lettie; her mother, Ginnie Hempstock, and her grandmother, Old Mrs. Hempstock – a perfect maiden-mother-crone group.

It’s obvious right away that they possess magic; the boy takes this in stride. He loves mythology and fantasy, after all. Then they find that the opal hunter’s death has turned something bad loose into our world, and it’s up to the boy and the Hempstocks to fix things.

I love Gaiman’s work, but have never found it scary. This book had me scared for the people and unable to put it down- I read it in two stretches, only taking out time to sleep. Obviously, the narrator survived, but what about the others? This – thing- seems to have the power to destroy the world; certainly it is destroying the boy’s family and the other townspeople. What price will be paid to be rid of it?

In this book- which reminded me of Ray Bradbury’s work that featured kids- ordinary things become magical. A puncture wound in the foot becomes a hiding place and a passage. Fabric becomes alive. An ocean- not just any ocean, but the ocean from which all energy, matter and magic arises- fits in a duck pond or even smaller space. This is the way kids see the world at some point: a place where magic, wonder and terror is not just possible but an everyday occurrence. A father’s abuse is brought on by magic; food is extra delicious when prepared by magical women who just happen to show concern and affection for a mostly ignored boy.

The tale is full of wonder, and terror, and courage, and sadness. For most people, as they grow up, the magic falls victim to life. But it’s good to remember, at least once in a while, that it exists. This book proves that.

The above is an affiliate link. If you click on it and buy the book, Amazon will give me a few pennies. This in no way alters my review of the book.
Posted by Laurie Brown at 5:52 PM