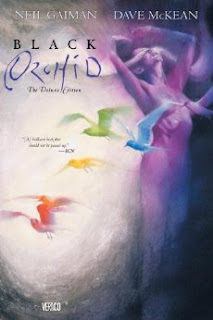 This book gathers the three part graphic novel story arc of Black Orchid into one paperback. Originally published around 1990, this the origin story of a DC character that had been around for years but little used. The original character was a woman of mystery; she never even had a secret identity given to her. This book explains why: she had no human identity, but was created by placing the genes of a specific woman, Susan Linden, into an orchid plant. Black Orchid was not born, but grown.

It’s a very violent story of vengeance and greed; film noir meets superhero story. Other characters from the DC universe are in it; Lex Luthor places a large part, while others make only brief appearances. It’s very different from what I would have expected from DC comics in that era; it’s not just a superhero story, it’s a very personal one. Black Orchid’s relationship with the plant world in the Amazon is almost spiritual. The art is stunning; McKean’s use of light and dark is beautiful.


The above is an affiliate link. If you click through it and buy the book, Amazon will give me a few cents.