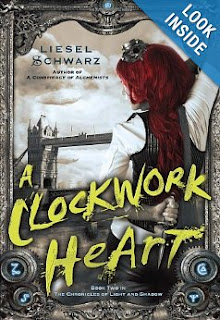 After reading the first book in this trilogy, ‘A Conspiracy of Alchemists’ I had hopes for the second installment. Sadly, the things that disappointed me in the first book didn’t get any better in this one. Elle Chance, the main character, now married to Hugh Marsh, has not matured. She still refuses to take advice or even listen to people, acting like a sullen 14 year old. As the Oracle, she can hear the voices of all the Oracles before her- a source of great wisdom- and she banishes them because she is tired of listening to them. Hugh, with his powers bound because of his marriage, is bored with life as a mortal, especially with Elle still running her airship business; a number of reviewers have condemned Elle for continuing to fly after her marriage, but Hugh knew she was an avid pilot before he married her! And the couple hasn’t learned to talk to each other.

The ideas presented in the story are good- Hugh has gone missing, and someone is kidnapping people, replacing their hearts with clockwork, and using them as a zombie army. But while there is a lot of action, it frequently fails to thrill. It’s like the author was just getting it out of the way, doing a job. Adele the absinthe fairy has a part, but it’s an unsatisfactory part. Baroness Belododia the vampire plays a large part in this novel, but she’s not enough to save the story. It’s just… flat.

I’m torn about reading the next installment when it comes out. Will Elle and Hugh mature and become a team? I’m not sure I care enough to find out. I probably will end up reading it, because there is so much potential here, but it will be with some trepidation.

This book was given to me by the Amazon Vine program in return for an honest review. The fact that I got it from them in no way influenced my review.

The above is an affiliate link. If you click through it and buy the book, Amazon will give me a few cents. This in no way influences my review.
Posted by Laurie Brown at 9:49 AM