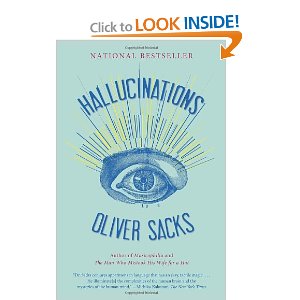 The book starts with one disorder, Charles Bonnet Syndrome, which sometimes occurs in people who have lost their sight. Suddenly, they will begin to see again- except they are the only people who can see the things. Once told that the people (or whatever) are not real and that there is nothing wrong with them, some patients actually find the illusions interesting and amusing and even miss them when the hallucinations abate.

Those things we ‘see’ in the dark as we’re falling asleep are hypnagogic hallucinations; they usually have no emotional impact. Hypnopompic hallucinations and sleep paralysis, however, can be terrifying. Occuring as the person wakes, these hallucinations happen with they eyes open and are projected into the external environment and seem real- the monster is in your bedroom. Add sleep paralysis, where the mind is awake but the body hasn’t gotten the message yet, and you can’t fight or escape from the monster, dubbed in the past as the Hag or the Night Mare.

Told in Sacks’ usual amusing but informative style, this book is rich in detail but easily understandable by the person with no neurological knowledge. In this book, Sacks tells us something of his own history with hallucinations due to drug use in the 60s. One doesn’t expect this sort of openness in a medical book and I found it amusing as well as instructional; he can look at the drugs from the point of view of both doctor and user, providing an unusual balance. As always with one of Sacks’ books, it’s not to be missed if you have an interest in the brain.

The above is an affiliate link. If you click through and end up buying the book, Amazon will give me a few cents.
Posted by Laurie Brown at 1:49 PM