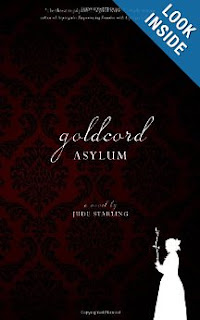 Set in northwest England in the year 1866, this heartbreaking novel is of a woman put into a mental institution by her husband- a husband she never wanted. Ivy Squire, nee Greenlake (having to change her name was an irritation to her) was married by her parents to Benjamin Squire as a social and economic move; Squire’s mother, who made the match, only wanted someone decorative and fertile. Ivy was not consulted at all- not at all unusual for that time. Ivy, an avid reader and devoted to her invalid sister, had no interest in leaving home. But her odd ways had always been an embarrassment to her mother, and this marriage offer was a good arrangement in her eyes.

Sadly, her odd ways make her less than satisfactory to her new spouse and mother-in-law, and Ivy is revolted by her husband and his demands. When she finds secret ways to maintain some autonomy, her happiness proves short lived.

Ivy’s odd ways are simply Asperger’s syndrome, unheard of in the Victorian age. In our day, people with Asperger’s are just beginning to be accepted as normal (whatever that is); imagine how much worse it would have been back then, when every inconvenient female was considered to have a mental illness, as was every one who did not adhere closely to the prevailing way of life.

Problems at the institute make Ivy’s – and the other patient’s- situation worse. Enoch Gale, founder of Goldcord and Medical Superintendent, has secrets that would ruin him were they known. To add to Gale’s problems, the Commission in Lunacy, which oversees mental hospitals, is starting to frown on the fact that very few patients are released as cured. Dr. Ballard, new to Goldcord, and the new nurse, Tilly Swann, show promise of making humane changes, but can they do this before a panicked Gale destroys lives?

While told in the third person and weaving together the stories of Ivy, Ballard, Swann, Gale, and the Matron, Eugenia Harvey, the heart of the story is Ivy’s, told to Tilly Swann. Ivy comes through as a determined person who may not always make choices that everyone would but has to be admired for her strength, loving nature, and intellect. The characters all come to life on the page, but I felt I knew Ivy as a living, breathing person. A lot of research went into this book and the historical aspects are spot on. I very, very rarely do this, but I cried at the end of this story. I highly recommend this book.

The above is an affiliate link. If you click through it and end up buying the book, Amazon will give me a few cents.

My copy of Goldcrop Asylum was given to me by the author in return for a fair review; this in no way affected my review.
Posted by Laurie Brown at 6:02 PM