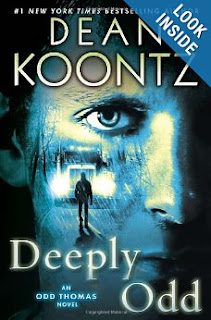 This is the latest volume in the Odd Thomas series, about a young man who can see the lingering dead and has the ability to find people by a sort of psychic magnetism. Trouble seems to seek him out, and his conscience won’t let him step away from it when he can possibly help someone. This book starts out with Odd walking to the store, only to run into a someone he tags ‘the rhinestone cowboy’, a trucker who tries to kill him right in the grocery store because Odd was looking in his truck. When Odd touches the trucker, he sees a man torching some children, and he knows he has to follow the rhinestone cowboy to prevent the deaths of innocents. With the help of the ghost of Alfred Hitchcock and a little old lady with a 12 cylinder Mercedes limo, he goes into action against the most dangerous foes he’s faced yet, a demon worshipping cult. He also learns that the world is a far, far weirder place than even he thinks it is.

Koontz writes a find blend of horror and black humor. Written in the first person from Odd’s point of view, he gets to make dry comments about society that wouldn’t be possible in a different format. He describes things in a these are just the facts manner that is none the less very humorous, a relief from the suspense of the rest of the writing. I love this series, and I see I’ve missed a couple. I must remedy that before the next one comes out- one that may be the last of the series.

The above is an affiliate link. If you click through and buy the book, Amazon will give me a few cents.
Posted by Laurie Brown at 11:42 AM