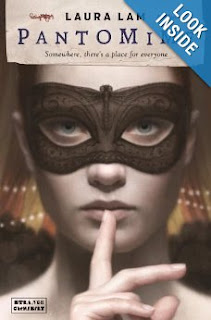 Iphigenia Laurus (who prefers to be called Gene) is the daughter of one of the noble houses on Ellada. She is being taught the usual pursuits of a noble lady- embroidery and the like- which bore her to tears. She prefers reading, or the company of her older brother, Cyril, and running through the woods with him, climbing trees and scaffolding in the city. At the same time, she loves dancing and lovely dresses. Her parents have her future all planned out for her: a proper marriage that will bring more fortune to her family. When she finds out that something awful is planned for her before her entry into the marriage market, she wants to flee.

Micah Grey is a teenaged runaway, trying to join the circus. To prove they should take him in, he does some crazy things on the high wire- despite never having been on one before. He impresses the aerialists, Arik and Aenea, enough that he is taken in, a new member of R.H. Ragona’s Circus of Magic.

I’m not giving anything away by letting out that Gene and Micah are one and the same – you can figure it out in the very beginning of the story. That’s not all that unusual a situation in a YA story where there is a teen runaway. But Micah/Gene has a secret that, if discovered by the wrong people, could get hir beaten, ousted or killed.

This is fantasy, an incredible coming of age story where the protagonist has a lot more to discover about them self than the usual teen, a circus story, and a love triangle all brought together beautifully by the author. In a cast of fleshed out, well drawn characters, Micah/Gene is a brilliant creation. I eagerly await the next book in the series!

The above is an affiliate link. If you click through it and buy the book, Amazon will give me a few cents.
Posted by Laurie Brown at 7:22 PM