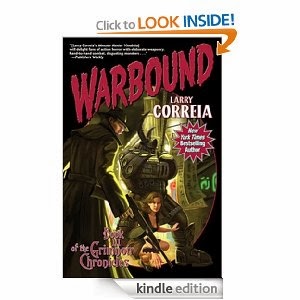 This is the concluding volume in the Grimnoir Chronicles trilogy, and the series goes out on a high note. Jake Sullivan and his motley crew of Knights must save the world again; this time from the Enemy, a powerful alien that is in pursuit of The Power, the being that gave magic to the world not too many years before the story starts. Set in a film noir 1930s of an alternate universe, Jake & company find themselves fighting both the Japanese Imperium and the Enemy while dodging the US FBI agents who want to round up all the magical beings. The good guys are all stretching their magical powers to the limit, learning new things. Throw in airships, a nearly invincible Samurai defector, and a teenager that is so powerful that the head of the Grimnoir Knights wants her killed and it’s nonstop action.

I love this alternate universe that Correia has created. My only complaint is that the characters aren’t always developed enough. The action is what the book is all about. It’s got somewhat the flavor of the old pulp magazine stories that went from one crisis to another and left you wanting more. Which brings me to this: I said it’s the last of the trilogy, but I, for one, wouldn’t mind seeing more books in this series.

The above is an affiliate link. If you click through it to Amazon and buy something, Amazon will give me a few cents.
Posted by Laurie Brown at 2:54 PM