How Doctors Feel: How Emotions Affect the Practice of Medicine, by Danielle Ofri, MD. Beacon Press, 2013

Doctors are expected to have a professional demeanor, treating all patients equally and compassionately, without their emotions interfering. But doctors are human beings first and physicians second. They have prejudices. Med school and internship overworks them and burns out their empathy before they ever get their license. Dr. Ofri writes from the perspective of some one who has worked the emergency room in a poor area for some time and she has seen the good and bad sides of what happens when doctor’s emotions guide them. 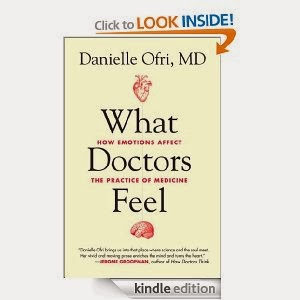 Common prejudices include those against alcoholics, drug abusers and overweight people, who they feel bring their own problems on themselves. These prejudices can lead to doctors giving these patients less time and less thought- even though what they are in the ER for may have nothing to do with their addiction or weight. On the other hand, sometimes doctors come to care very much about patients and move heaven and earth to get them the treatment they need and grieve when they die. A huge source of stress to doctors is the ridiculous amount of paperwork that doctors have to deal with these days; insurance companies demand that doctors justify every test and then deny tests or life changing treatments; that can suck the joy out of anyone. Ofri tells us of how stress reduction programs in hospitals have decreased problems with doctor burnout and lack of empathy- it looks like every hospital needs such a program, especially for doctors who staff the ER.

That part of the book is good. I appreciate seeing things from the other side of the stethoscope; this sort of book can only improve doctor patient relationships. But on the other hand, MDs are idealized in much of the book. Ofri feels that malpractice suits hurt patients as much as they do doctors; I have no idea if this is true.  She states that doctor rating sites- sort of like Angie’s list but for MDs- shouldn’t exist because a doctor can get a rating about a bad day they were having and it would drive possible patients away and also hurt self esteem. Sorry, but I don’t buy that. The same could be said of anyone, of any career, who gets rated. Bad ratings are part of the system and, if the rater isn’t a crank, could serve as hints that the doctor has some problems, whether it be with their front office procedures or their bedside manner, which could be improved. The world doesn’t owe anyone blind trust.

All in all, the book is good and useful if somewhat slanted in favor of MDs and a bit disrespectful of patients.