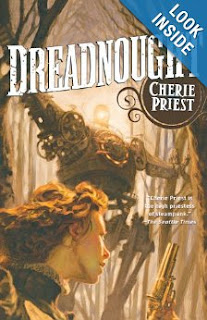 This is the second probably the third book in Cherie Priest’s Clockwork Century series, set in an alternative 1800 world of steampunk, airship pirates, zombies and wild inventions. Like the first book, Boneshaker, this book features a strong female protagonist that I immediately took to.

Mercy Lynch, a nurse in a Confederate hospital, gets word that her soldier husband has died at almost the same moment that she gets a message that her long vanished father is very ill and wants to see her- in Seattle. She surprises herself by making the decision to go and visit him, a trip that, given the war, isn’t easy. Her trip across the continent by airship, steamboat, and train – no regular train- is a wild adventure full of disagreeing Confederates, Union soldiers, Texians, missing Mexican troops, zombies, gold, and a mad scientist. Mercy is a tough woman, though, and deals with it all with courage and inventiveness, her nurse’s training standing her in good stead what with the bullets flying almost constantly.

One of the things I love about this book, and Boneshaker, is that the protagonist is not just strong, but that she is not a stunning beauty that men fall instantly in love with. In fact, there is no romance in the books. Nor are they genius inventors; they are average women doing what needs to be done. One can identify with them easier than with some fantasy women- or at least I can!

The universe that Priest has built for this series holds together well. Dreadnought is a can’t-put-it-down, fast read that is full of action and has just enough creepiness- not enough to slow the story down, but enough to ratchet the anxiety level way up.


This is an affiliate link. If someone uses this link to buy the book, I get a few cents from Amazon.
Posted by Laurie Brown at 10:27 PM