Unearthed: How an Abandoned Garden Taught Me to Accept and Love My Parents, by Alexandra Risen. Houghton Mifflin Harcourt, 2016

Just as the author and her husband buy an acre property just outside downtown Toronto, her father dies. This doesn’t make much of a difference in Risen’s life; in her entire life he has hardly ever spoken to her. He didn’t ignore her; he would work on projects with her- silently. That was pretty much their only interaction. It wasn’t that he couldn’t speak; her parents had long, loud arguments all the time. Her mother, always working in the garden or putting food by, is now alone and getting fragile, and has always preferred Risen’s older sister; she also almost never spoke to her younger daughter. The restoration of their new house and property, a chunk of a former large estate, is narrated concurrently with Risen’s quest to understand her parents. 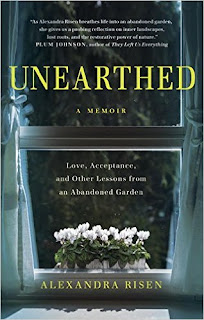 The reason that the author was so taken by this rundown and overgrown piece of property is that it’s on a ravine and is like a piece of forest in the urban setting. As a child, she would escape into the forested ravine behind her house, spending hours there away from her parents, who apparently didn’t care that she was never home. It’s also a challenge, I suspect; if she can make this garden beautiful and orderly, maybe her gardener mother will finally think her worthy of love and attention. Sadly, over the ten years of so it takes to renovate the acre, her mother has a stroke and then develops dementia. Despite Risen’s insistence that she get on a plane and visit, she will never see this piece of property. But when the author and her sister clean out her mother’s place as she is moved to a home, they find a cache of old papers- papers that may hold some answers to her questions about her immigrant parent’s origins.

I really felt for the author; like her, my now dead parents are a deep mystery. Unlike her, there is no folder of hints or clues, but her search for answers struck a chord with me. The urge to know where one came from is, I think, fairly universal, and to have parents who never speak of the past leaves a hole in one’s heart. I’m also an avid gardener, and would love to have a property with old oaks, a redwood, a spring fed pond, and an old falling down pagoda. I understand the amount of work it would take to bring a place like that back into orderliness, although I have no comprehension of the amount of money it took them with all that they hired to have done- had the concrete pagoda rebuilt, professional arborists, landscape designers, a pool installed- their place is the proverbial money pit.

Risen does remember her mother’s lessons on wildcrafting; each chapter ends with a recipe or craft done with plants from the land. Risen also chronicles her son growing up; he’s not very much into gardening-he’s a computer kid- but he does enjoy the paths and the pond, wildlife, and some of the crafts. The garden provides them with ways to be closer.

The story is bookended by deaths; the author’s father begins it and her mother’s ends it. Risen has not found the answers she wanted, but she has learned some of what made them who they were. And she feels they did, as my mother said she did, ‘the best they could’. I really liked the book, even though I found the author frustrating at times as she had moments of immaturity. I stayed up nights reading it, and thinking about it when I was out gardening.

neither of these things influenced my review.
Posted by Laurie Brown at 5:25 PM