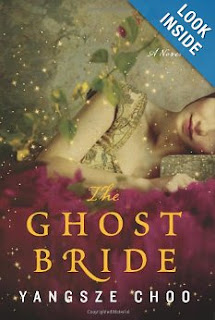 In Malaya in the 1890s, 19 year old Li Lan lives with her opium addicted, widowed father. Formerly a wealthy man, opium use has caused her father to trust the business to partners who took all his money, leaving them alone in a big house with only a cook, a maid, and Li Lan’s Amah- the nurse/nanny who brought up Li Lan and also her mother. While having three servants sounds fabulous to our modern mindset, in that time and place it was the bare minimum.

Li Lan is in danger of becoming an old maid, but has given no thought to marriage, preferring reading and studying. So she is surprised when one day her father asks her, out of the blue, if she would like to become a ghost bride to the recently deceased son of one of the richest families in the city. To become a ghost bride is to wed someone who has died, and live with their husband’s family as if a widow. Li Lan turns down the offer and thinks nothing will come of it. But it’s just the start of an incredible story that’s part Chinese mythology, part fantasy, part romance, part murder mystery and part espionage, as the sheltered Li Lan finds herself under attack by demons and ends up in the land of the dead. Can she find her way back? Who is the mysterious Er Lang? Was her prospective bridegroom murdered, and if so, by who? More than one person had motive and opportunity, including a man that Li Lan desperately hopes did not do it. Who can she trust in this weird place?

I like Li Lan, a smart girl whose ingenuity and strength get her through many bad situations- even though she has a few panic moments. The story flows compellingly, and the setting is vividly portrayed. Although written for adults, I think this novel would be enjoyed by young adults, also, as it’s also a coming of age tale. This is Choo’s first novel, and I hope it won’t be her only one.

This book was provided to me by the Amazon Vine program in return for a fair review. This in no way influenced my review.

The above is an associate link. If you click through it and buy the book, Amazon gives me a tiny sum of money.
Posted by Laurie Brown at 2:35 PM