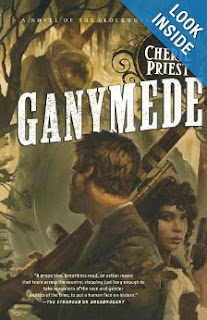 This book in the Clockwork Century series has air pirate Andan Cly thinking about quitting the business and settling down in Seattle to be near Briar Wilkes, now sheriff of the broken city. He intends to quit running the Blight gas to the people that make it into the horribly damaging drug Sap. To do this, he must have his airship refitted into a regular cargo ship, not possible in Seattle. By coincidence, he is offered two jobs at the same time- one from the new head of the city to make a supply run, and another, mysterious one, from an ex-lover, Josephine, in New Orleans. He can take care of all three of these things in one trip! Of course, he doesn’t know what Josephine’s job entails, but that’s not something to worry him too much.

Once down in New Orleans he finds that the Texians are holding the city under martial law. It seems they are looking for a machine- a machine that could end the Civil War (which has been going on for over 20 years in this universe). This machine, the Ganymede of the title, is an ‘underwater airship’, and the people who attempt to run it keep dying in the attempt. This is where Cly comes in; Josephine thinks that an airship pilot will have better luck with it than a boat captain. Of course, because of the Texians, the Ganymede must be moved in complete secrecy, which doesn’t make it easy to work out any problems in running it.

Unlike the other books in this series, Ganymede doesn’t move along with breakneck speed. There is much less action; almost none until near the end of the book, when there is a great battle scene on and in the water. There is a lot of suspense: will they get caught by the Texians? By zombies? Will the Ganymede kill them, too, or will they figure out how to pilot it safely? Why are there zombies down in New Orleans, anyway, when they originated in Seattle via exposure to the Blight gas? The pace is very different from the other Clockwork Century books, but different isn’t a bad thing.

The above is an associate link. If you click through it and buy the book, Amazon gives me a tiny bit of money.
Posted by Laurie Brown at 2:47 PM