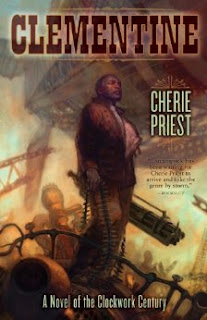 ‘Clementine’ is the new name of the ‘Free Crow’, the recently stolen air ship of Captain Croggon Hainey. It’s making its way across the United States, carrying something heavy to a sanitarium in the east. Hainey, escaped slave and air pirate, is chasing it in the airship that he stole in turn, the Valkyrie, and has found himself the unwilling partner of Maria Isabella Boyd- Belle Boyd- former Confederate spy, former actress, and currently a Pinkerton agent – and, by the way, an actual historical person. Belle’s job is to see to it that the ‘Clementine’ makes it safely to the east and to capture Captain Hainey if possible; Hainey just wants his air ship back. But something is definitely wrong about the story Belle has been told, and temporarily teaming up with Hainey looks to be the best way to find out what’s going on.

This is a fast paced story, trimmed down like a race horse to fit into novella size. Yet despite the short length and nearly non-stop action, Priest has room to create fleshed out characters and to address the race relations of the late 1800s (in her Clockwork Century world, the Civil War is still going on after two decades), where having Belle, a white Southern woman, and former slave Hainey working and traveling together is unusual. A word from Belle against Hainey and he’d be strung up without question; Hainey’s all black crew doesn’t trust Belle and wants her gone as soon as possible because of this. This gives the short adventure story an extra tension and depth that many fantasy stories don’t have.

The above is an affiliate link. If you click it and end up buying the book through that link, I'll make a few pennies.
Posted by Laurie Brown at 11:58 PM