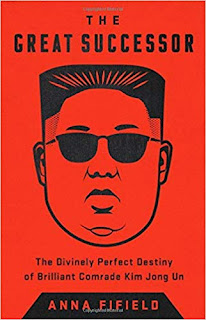 The plump and oddly coiffed dictator Kim Jong Un seems to make the world laugh. This book will change the mind of anyone who reads it. Fifield, who was a correspondent in North Korea for over a decade, is uniquely placed to reveal the horror of North Korean totalitarianism and un-comic a person Un really is.  She talked to sources as varied as his aunt and uncle who raised him while he went to school in Switzerland, the man who was sushi chef for the Kims, who befriended Un when he was a child, and various people who have escaped the country or who do business there. It’s dangerous to speak to reporters if they have any relatives in the country.

It wasn’t easy to learn about Un. He was brought up out of the public eye, entitled amidst vast, showy wealth but lonely. Obsessed with basketball and weapons, a bizarre cult of personality was created around him- that he was an expert marksman at age 3, that at age 8 he drove a truck 80 mph. He wasn’t the obvious choice for heir to the Kim dynasty; he wasn’t the oldest son and he wasn’t son of the first wife. But his mother was ambitious and pushed him to the, well, throne. Family members who might challenge his right to the throne wind up dead- one uncle was quite publically assassinated. Importantly, he understands the modern world of computers and cyber spying.

He supposedly knows everything about everything and runs every aspect of the country, from the minutia of the economy to how nuclear weapons should be built. Despite being raised in insane luxury and having access to whatever he wants, he plays man of the people, meeting the crowds and hugging people. But he is scrupulous about having hotel rooms and other places totally wiped down when he leaves, removing any stray DNA that might give a clue to his health.

Under Un’s rule, there has been a rise in entrepreneurism and markets. Cell phones, bikinis, and plastic surgery are becoming common, and there is a private transport industry to make the markets possible. Businesses are run for profit, and the owners can hire or fire employees, rather than having them assigned by the government. But before this openness took place, he had sealed the borders and cracked down on the internet and TV to terrorize the nation. Freer markets are allowed because, in the end, it boosts Uns income- there are kickbacks and bribery at all levels. With the more open markets has come a drug problem; in a country where most people are still hungry, meth, with its appetite suppressing quality, is hugely popular.

The freeness and prosperity of North Korea is, in many ways, illusory. While huge high rise apartment buildings are being built, they are already falling apart. No one wants to live on any floor above the third or fourth, because the elevators are probably turned off or broken. There are self-criticism sessions every week (shades of Maoism) and huge concentration camps in the areas of North Korea with the worst climates.

But this man stroked Trump’s ego so that Korea got good concessions and Un got to keep all his nukes. The man is not a raving madman- well, not *just* a raving madman- he’s a smart, coldly calculating despot who knows exactly what he’s doing as he builds up his ability to nuke anyone, anywhere. A very interesting book with good research, that I think everyone should read, but it is choppy and jumps around. Four stars.