Crashing the Party: From the Bernie Sanders Campaign to a Progressive Movement, by Heather Gautney. Verso, 2018 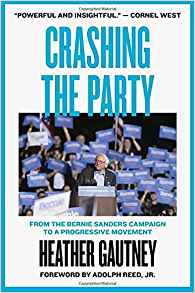 A brief look at the 2016 Democratic primary, Bernie’s campaign, and the history behind them. Bernie’s own political history is in stark contrast to Hilary’s. He came up from the bottom, representing the poor and people of color, while Hilary (as well as Bill Clinton, and, for that matter, Obama) was funded by, and stood for, the class of people with money to invest in her campaign.


The author, a professor of sociology as well as staffer for Sanders, tells us how the appeal of the socialist message worked. He brought in the majority of the youth vote, and that of the lower classes and people of color. Sadly, the super delegates worked against him, causing him to lose even in states where he won the majority of the popular vote (how ironic that something similar worked against Hilary in the general election). An easy read; it’s the first political book I’ve found readable since Fear and Loathing on the Campaign Trail. Five stars.

Neither of these things influenced my review.
Posted by Laurie Brown at 2:34 PM