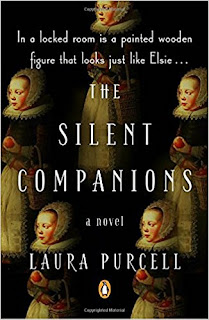 In 1865, Elsie Bainbridge, newly married, newly pregnant, and newly widowed, arrives at the family home of her late husband. Here she will wait out her pregnancy with only her late husband’s cousin, Sarah, and a bare handful of servants. This setting, far out in the country, is a new thing for her. She grew up in her father’s match factory in London, working there as soon as she was able as a child, and, following the deaths of her parents, bringing up her brother.


The Bridge, as it is called, is immense, and not in good repair. There are not enough servants to keep it up, and the villagers are afraid to work there. Soon enough, Elsie starts to see why. Mysterious noises fill the night. The nursery is clean and lovely one day, and dusty and filled with falling apart curtains and linens the next. But it’s not until a trip up into the attic (which is locked one minute and open the next) that things really get weird. Elsie and Sarah find two volumes of diaries from 1635, written by Anne Bainbridge, and centering around a visit by Charles I and his queen. These form a different narrative strand. They also find the silent companions- wooden cut outs that are painted very realistically as people. These were a real thing in the 1600s, although mainly in the Netherlands. People would put them in places in the house to startle people or just for décor. These particular companions, though, aren’t quite, stationary decorations. These move- but only when you’re not looking. Like Weeping Angels, you don’t blink if they are after you! For some reason, inanimate objects that pursue seem scarier to me than having a living person after you. And one looks surprisingly like Elsie- even though she’s not a Bainbridge by blood.


The third narrative strand is taking place in 1866; Else is in a mental hospital, in solitary, mute, and horribly burned. Her doctor gives her a pencil, and asks her to tell him what happened. Slowly she unveils the tale of the horror that she and the others went through. And it really is horror. One is never sure if it is supernatural (it certainly seems to be) or if someone is gaslighting Elsie- and if that is true, *who* is doing the gaslighting? It seems like everyone in the house is seeing and hearing the unexplained events. In the end, things still aren’t clear. Someone gains immensely from the situation, but is that person the perpetrator, or simply a very lucky by stander?


I downloaded this book and decided to take a quick look at it… I ended up sitting down and reading the whole thing over the day and evening. I could not wait to see what would happen next. I liked Elsie and found her a very intriguing character; although not so nice things about her turn up over the course of the book, she had reason for doing the bad things she did. Sarah surprised me. Elsie’s brother is an entitled twerp. I was sympathetic to Anne; she was the start of the terror but did it innocently. I was genuinely creeped out by this story, and it takes a lot to do that. I’m looking forward to more books by the author! Five stars.