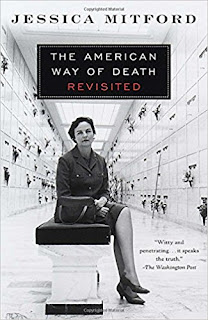 When Jessica Mitford first wrote this expose, it was a shocking book. That was in 1963; I read the updated 1998 version. Sadly, she died just as they were finishing up the book. I would have loved to have read what she thought about the funeral industry today!

While Mitford is careful to point out that there are honest and caring funeral professionals, she takes aim at the ones who are in it strictly for the money. While *any* business is in it for money, people seeking funeral services are in a very vulnerable position; they are both emotionally wrung out and racing against the clock to get things done. Few people are in the position to shop around, so when a funeral professional engages in some of the practices advocated in some of the professional magazines, they are very apt to get away with them. Strategic placement of less expensive coffins (“Caskets” these days) so they look cheaper than they are, provoking guilt feelings if the family doesn’t buy the most expensive everything, lying about laws concerning embalming, burial vaults, and more are all on the menu. And as more and more family owned funeral parlors get bought up by mega-corporations, which own not just the funeral parlor but the cemetery and the flower shop, choices are disappearing.

What makes this peculiarly American? In 1998, America was about the only place where open casket funerals were common. Having the corpse in view, there was a great opportunity to sell the family on embalming, cosmetics, clothing, and a fancy coffin interior, all of which are unneeded if we’re not looking at Uncle John or Aunt Edith. Embalming was nearly unheard of in other countries. (Mortuaries have been known to lie and tell families that embalming was required by law. It wasn’t. Anywhere.) Having a big funeral at the mortuary, with lots of flowers, was mostly an American thing. Cremation was not in big use, although it’s gotten much more used today. (That was another selling point: they wanted to sell a place in the cemetery to bury the ashes in, so they said that if the ashes were scattered, there would be no place for the family to visit the loved one)

The book is well researched. Mitford managed to get hold of lots of professional magazine, went to funeral profession conferences, and talked with many both in the industry and close to it. The story is horrifying, but Mitford’s wit is biting and the book is an amusing read. She is even handed where it’s called for. I feel it’s a very important book, one that should be read early in life, before one is likely to have to deal with the industry, so that one doesn’t end up railroaded into spending every penny giving Grandpa the send-off the mortuary feels he deserves, marble angles, super mattress in the coffin, shoes for in the coffin advertised as ‘comfortable’, and all.

This did not influence my review.
Posted by Laurie Brown at 3:09 PM