The Mercy of the Tide, by Keith Rosson. Meerkat Press, 2017 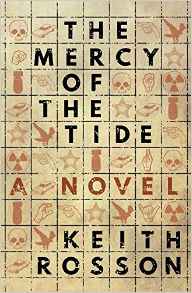 Dave Dobbs, Nick Hayslip, Sam Finster, and Trina Finster live in the tiny ocean-side Oregon town of Riptide in 1983. The four of them are connected by recent deaths in a two car collision; in that collision, June, who was Dobb’s wife of decades, and Melissa, mother of Sam and Trina and also the adulterous girlfriend of Hayslip, were killed. Each chapter tells the evolving story- and the past- from a different characters point of view. Sam is a senior in high school; his little sister Trina is 9 years old, deaf, and dealing with the death of her mother by concentrating on the news of worsening relations between Russia and the USA and worrying about nuclear annihilation. Dobbs is the head of the police department; Hayslip is one of his officers. Dobbs is dealing with his loss in a pretty normal way; Hayslip is losing it rapidly- in part because no one knew about his relationship with Melissa and he doesn’t want it getting out. Meanwhile, birds are being found torn apart, and Trina has found a human skeleton in the park.

The book is billed as horror, but it’s also an alternate history thriller. You’re given a few clues about the difference in the timeline fairly early on, but you don’t get to find out how different it is until the end. The horror, it seems (and there is a little bit of supernatural horror), is only a lead up to the thriller part. Mainly it’s a story about how different people deal with loss- no two people deal with loss in the same way- and it’s done very well.

Despite the horror element, this book is character driven. The main players are well drawn and deep. I loved young Sam, who paired regular teen punk rocker angst with taking a lot of responsibility on after his mother’s death. I felt so sorry for Sam and Trina’s father, trying to keep the family from falling apart after his wife’s death. While all the characters are flawed, they are all good people, just trying to get through life, even when (especially when) life throws some really weird shit at them. It’s sort of Stephen King meets Ray Bradbury.

The ending was… odd. I’m not sure if this is the start of a series or if that was, indeed, the rather abrupt end. It’s dramatic and stunning, either way.

I received this book free from the LIbrary Thing Early Reviewers program.

Neither of these things affected my review.
Posted by Laurie Brown at 4:20 PM