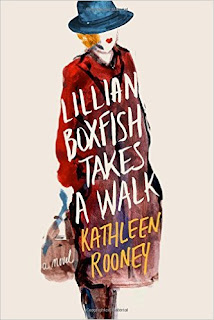 It’s New Year’s Eve of 1984, and 85 year old Lillian Boxfish is taking one of her long walks through New York City. She hit New York young; she wanted out from under the thumb of her family in D.C., and she wanted the exciting life of the big city. She soon was hired by Macy’s, writing distinctive ad copy, as well as publishing books of poems. She made quite a lot of money, despite not being paid nearly as much as the male ad writers.

As Lillian walks, the cityscape brings back memories of her long life. Here was the tiny apartment she and her best friend shared, where they partied constantly. Here’s the ladies only hotel she lived in while saving up for said apartment. Here’s Macy’s, where she worked up until she became pregnant and became persona non grata. Here’s the park, the Hudson, the restaurants. The hospital where she was taken when she had a breakdown.

The story is not just an autobiography of Lillian, but a paean to the city and its evolution. I came to love “listening” to Lillian tell her story, like sitting down to tea or cocktails with a really tough but nice woman, who spans the time from Prohibition and speakeasies to the 80s AIDS epidemic. Lillian is witty and arch, as if sitting at the Algonquin Round Table. The only thing I found odd was that everyone was so friendly and accommodating; after hearing for decades how rough and gruff New Yorkers are, it was odd to find even the muggers being nice.