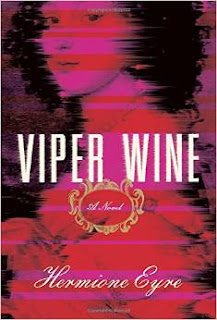 Venetia Stanley and her husband, Sir Kenelm Digby, were real people. She really did die mysteriously. Wealthy ladies of the time really did buy and apply and ingest all sorts of potions guaranteed to make them youthful again- or, at the very least, arrest aging. Digby really did have Anthony Van Dyck paint her portrait after her death.

In this book, Digby’s mind picks up on voices from the future. He has a radio mast in his backyard, although it’s 1632. Sometimes he sees his estate, Gayhurst, as it will be in four centuries, used for Alan Turing’s Enigma Machine. Perhaps this is why he frequently seems to be not quite all there. Venetia, once thought a great beauty, is now facing being thirty years of age- ancient, to the people of that era. She has two children; she cannot be the fascinating and beautiful woman she once was. And, sadly, that’s all she knows how to be. When she hears of potions that can make a person young and beautiful, she begs her husband-an alchemist- to make her some. When he refuses, feeling that she is so beautiful she could not be improved upon, she seeks help from her circle of women friends at court. Despite youth formulas sometimes horrible side effects, most of the ladies of the court are using them. And some of them really work.

I’m not sure the decision to make this story magical realism really worked. While the fact that the potions really functioned - how they could ruin a woman as easily as make them young- added to the story, I didn’t feel that the 21st century bleeding through really added anything. It was, as they say in The Simpson’s, “Weird for the sake of weird”.

I felt sorry for Venetia; she was merely fulfilling the role given to titled women in those days, but her inability to be anything *other* than a beauty was frustrating. She was a good mother, but even that was background to her looks. The time slippage allows the author to draw parallels to our age’s obsession with youth and the things women will go through to stave off the signs of aging, but it wasn’t really needed. It was pretty obvious what her view of that was without it. The prose is lovely, but the whole thing just didn’t come together in the end. It was, sadly, boring.

The above is an affiliate link. If you click through and buy something, Amazon will give me a few cents. This in no way influenced my review.
Posted by Laurie Brown at 3:15 PM