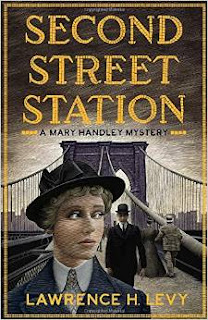 In 1888, in New York City, Mary Handley gets fired from her sweatshop job just in time to get appointed as a detective on the New York police force- the first woman to be on the force. Given the attitudes of the time, she is harassed by the men on the force and hounded by the press. But she’s determined to solve the murder of Charles Goodrich, barely retired accountant for Thomas Edison and fiancé of her friend. Through the course of Mary’s investigation, she meets Edison, J.P. Morgan, Nikola Tesla, a hired assassin, and a young man who woos her but turns out not to be as he seems. She finds herself followed, beaten, drugged, and lied to. But Mary is not your typical girl of this era; she knows jujitsu and is not afraid to fight. Although there are numerous people that look to have a reason for murder, the actual murderer turns out to be a complete surprise.

This is Levy’s first novel, and I have to say it shows in places. Mary is a, well, Mary Sue despite being authored by a man. She thinks a little too modernly to be totally believable, and speaks a little too modern era, too. I enjoyed the story, and feel the era was pretty well depicted, as well as the historical figures although I’m sure many readers will be upset by Edison’s portrayal. The story is based on a real event; Mary Handley was real and indeed helped to solve the murder. There was just a little too much explaining things to readers instead of just showing them; this looks to be the first of series so I’m hoping the author gets better with time as there is promise here.