Death at the Priory: Love, Sex, and Murder in Victorian England, by James Ruddick. Atlantic Books, 2001 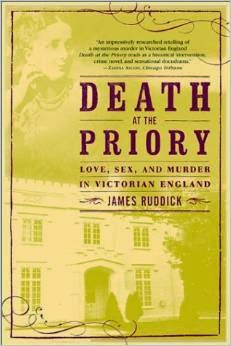 This is a non-fiction book in two parts: in the first half, the author tells what’s known about a murder that took place in 1875 England. In the second, he goes through the evidence and interviews descendants of the people involved and presents his theory of what happened.

Florence Campbell was the daughter of a well to do upper middle class family who had the worst luck in relationships. She married Alexander Ricardo, who was in the service, and demanded that he resign because she feared for his life in the military. He declined into total alcoholism and became abusive. When she left him and went home, her father refused to take her in, wanting her to ‘do the right thing’ and stand by her husband. For her to leave would reflect poorly on her family, of course, and he couldn’t have that. When she refused to go back to Ricardo, he agreed to send her to a sanitarium for a stay ‘for health reasons’. There she met Dr. Gully, the much older, married, owner of the sanitarium and they started an affair. During this time, Ricardo had the good grace to die, leaving Florence a rich widow. It did not do her much good, however, because word of her affair got out, ruining her in society. She was happy to marry Charles Bravo, as this made her acceptable to society again. He was happy to marry her, as she was very rich and let him spend her money freely. Bravo would have had it made had he not been a mean and greedy man, dismissing Florence’s servants and getting rid of everything that he personally had no interest in, such as the garden and the horses. He became emotionally, sexually, and physically abusive to Florence. Then one evening he became violently ill. Doctors were called and they realized he had swallowed poison. After three horrible days, he died. Was is suicide, as Florence’s paid companion claimed? Or had someone poisoned him? If so, who? There was no lack of people that he had angered. Despite an inquest, no one was ever charged with Bravo’s death.

Ruddick’s examination of the evidence convinced me pretty well that he has fingered the right suspect.  He was able to find out things from the descendants that never came out at the inquest. There were also presumptions about what people of different classes and sexes would and wouldn’t do that colored the minds of the investigators. Had this same crime been committed today, there would have most likely have been a conviction. An interesting piece of Victorian true crime.