The Year She Left Us, by Kathryn Ma. HarperCollins, 2014 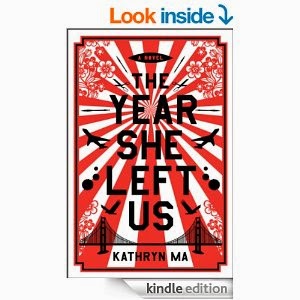 “The Year She Left Us’ is both coming of age novel and family drama. The main character is Ari, who narrates much of the novel. She was a Chinese orphan, left as an infant in a department store, adopted by a single woman, a hard working public defender. She is considered not only lucky because she got adopted by an American, but extra lucky because her mother is Chinese-American. No one need know she’s adopted, unlike the many Chinese girls (the children adopted out to America are most often girls, because of China’s ‘one child’ law; abandoning the girl baby allows them to try again for the coveted son) who are adopted by white people. Unlike other Chinese adoptees in the group of young girls (“Western Adopted Chinese Daughters”, aka the Whackadoodles) her mother takes her to for learning about her Chinese heritage, she doesn’t feel lucky. She focuses on the fact that she was abandoned, that she wasn’t good enough to love. She never feels like she fits in, not even with the other adoptees. While on a trip to China – which includes a tour of the orphanages- with the adoptee group, she is approached by a man who claims he is her father, an event that pushes her over the edge and she cuts her finger off.

Things don’t get any better when Ari returns home. Digging around the house one day, she discovers old pictures, ones from about the time when she was adopted, showing a man, along with herself as a baby held against his chest. On the back are the words “Aaron practicing to be a father”. She decides that she must find this Aaron; perhaps this will tell her who she is. She ends up in Alaska for months on this quest, and that isn’t the end of her wandering as she tries to find herself.

Interspersed with Ari’s narrative are third person chapters about her mother Charlie, her aunt Les, and Gran. Men are absent from the lives of these three women, and the women seem to survive just fine- on the surface. Charlie is driven by sympathy for her poor clients; Les is a judge and driven by ambition; Gran feels the past should be thrown away. None of them understand Ari’s need to belong somewhere. Neither, for that matter, does Ari.

The characters are vivid- especially Ari and Gran. Charlie and Les have less depth; they are politically correct and career driven; they are the stereotype of Asian Americans. Gran is a much more colorful person; Ari does just about everything a bad girl can do. I couldn’t work up much enthusiasm for Les and Charlie; they are pretty flat. I loved Gran and wished she had more of a part, and while I didn’t much like Ari I did sympathize with her and her search for answers that can never be found. It’s hard enough to be a teenager without wondering why your parents abandoned you. Why does Ari fixate on this while the other Whackadoodles don’t? We never really find out; people are just different. This book has surprising depth and maturity for a first novel; Ma is definitely a strong new voice in Asian American literature.

I was given this book free in return for an unbiased review by the Amazon Vine program.

Neither of these things affected my review.
Posted by Laurie Brown at 7:06 PM