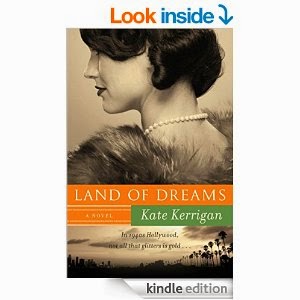 It’s 1942 and twice-widowed Ellie Hogan’s teenaged son Leo has run away from boarding school. It doesn’t take much sleuthing to find out that he’s taken the train across country from New York to Los Angeles: to Hollywood. He’s determined that he will be a star. Ellie immediately jumps on a train and follows him, to discover him living with another young man, Freddie, who is trying to become the world’s first actor’s agent, and Freddie’s girlfriend, Crystal, who fancies herself a starlet. They are holed up at the Chateau Marmont, with little money and no jobs. Ellie allows herself to be convinced that Leo has a real chance at getting a part in an upcoming film, so she takes a room for herself and Leo and figures it’ll only be a few days before this nonsense is out of the way and they can head home. To her surprise, Leo gets a part and is put into acting classes at the studio. Stuck in California for the time being, Ellie rents a house and sends for her younger son, Tom, and her aging friend and housekeeper, Bridie, and settles in for a few months while the film is being shot. She ends up taking in Freddie and Crystal, mothering them just like she does her sons, even though this means they have taken over the room she’d designated as her artist’s studio. For Ellie, being a mother is the most important thing in her life- she admits that she married her second husband in large part so she could be a mother to his son Leo. She is willing to put her own life- both professional and personal- on hold for her sons, feeling that she doesn’t have enough time or love to go around. Whether this means quashing a relationship that seems to have a lot of potential or giving up her painting, she’s fine with it.

Ellie acts like a very entitled woman. She barges in everywhere and expects everyone to listen to her, whether it be a studio executive or the military head of a relocation camp where a Japanese friend of hers is interned. She comes by this trait not from being born into money; she worked her way up from nothing during the Depression. She just feels she has to do her best to try and help her friends and family- even when she doesn’t have all the information and they desperately do not want her to intervene.

The book jacket makes the story sound exciting: it mentions glamour and glitz and having to protect her family from the threat of the war. In reality, Ellie encounters the glitz only occasionally, and the war is little threat to her family, although her own actions make things difficult for both her Polish born boyfriend and her Japanese friend. The story really doesn’t have much action in it. Told by Ellie in the year 1950, a lot of it is backstory (this book is the third in a trilogy) and her emotions and thoughts. I found I could not get really interested in the book; I couldn’t make a connection with Ellie or any of the other characters. They were flat and not fleshed out. Bridie as the Irish housekeeper was very nearly a stereotype. I found myself impatient with the book, wanting to get it read and have it over with so I could go on to something more interesting There is also a (small) problem with some anachronistic language – ‘networking’ and ‘lifestyle’ weren’t used in 1950 that I know of- but that may have been fixed in the final edit.

I received this book free in exchange for an honest review.

Neither of these things affected my review.
Posted by Laurie Brown at 2:26 PM