When the World was Young, by Elizabeth Gaffney. Random House, 2014 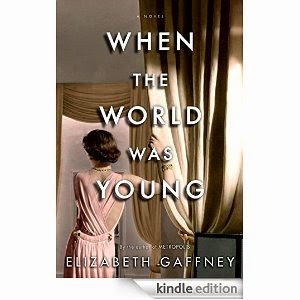 “When the World was Young” starts off to be a grand story, opening on V-J Day and the Brooklyn Heights neighborhood spontaneously celebrating together, marching around making noise. Nine year old Wally Baker starts that day happy but that isn’t to last long.

Wally is the daughter, granddaughter and I think great-granddaughter of female M.D.s; it’s the family tradition. Her grandmother Gigi runs the family with the aid of Loretta, her black live-in maid of all work. Loretta basically raised Gigi’s daughter Stella and is now raising, for the most part, Wally, along with her own son, Ham. After a childhood of studying ants with Ham, Wally is determined to study insects, not become an M.D. no matter what Gigi wants. She comes of age during the Korean War (oops ‘police action’). She’s extremely smart. She has relationship issues.

The story moves back and forth between times, sometimes showing us Wally’s timeline from seven year old to college student, and sometimes Stella’s past. It touches on the use of the atom bomb to end WW 2, racial prejudice, and sexism but it touches so lightly that it seems like they were just little problems that didn’t really affect people. No one will call Stella ‘Dr. Baker’; it’s always ‘Mrs.’, even from other doctors, but she is given no problems as an intern other than that. There are a couple of incidents of prejudice against Ham when he is with Wally, once when they are children and once when they are grown, but neither is serious despite the fact that during that era (and for a long time after in some areas!) being an interracial couple could bring very serious physical repercussions. Most things work out fine for Wally with little effort. The things that don’t work out for her – even very serious things- don’t seem to bother her. Things just bounce off her.

I have a problem with this. A lot of things happen in the story, but it doesn’t have any depth. The characters seem shallow and seem stereotypical; Wally is the do anything American Girl, Loretta is the Magical Negro, Wally’s father is the Absent Father who has nothing to do with Wally’s upbringing, Gigi is the Strong Matriarch. You would think that a novel dealing with race relations, suicide, marital infidelity, loss, and more would be exciting and that the characters would have a lot of emotions, but alas, no. Stella is the only one whose emotional life is explored very much. The book was a fast read and rather enjoyable, but it’s more like it’s an outline than a novel, waiting to be completely filled in.

I obtained this book free from the Amazon Vine program in return for an honest review.

Neither of these things affected my review.
Posted by Laurie Brown at 4:59 PM