Proof of Heaven: A Neurosurgeon’s Journey into the Afterlife, by Eben Alexander, M.D. Simon & Schuster, 2012 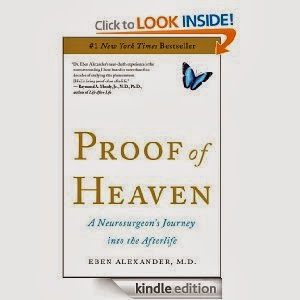 Eben Alexander is a neurosurgeon. In 2008 he contracted a rare illness that struck with unusual rapidity and put him into a coma hours after it struck. He remained in that coma, unable to even breathe for himself, for seven days. His doctors considered him brain dead and unable to wake up; or, if by some miracle he did wake up, he would be severely brain damaged. But he did wake up, and within a short time regained all his abilities. How did this happen?

While the pathogen causing Dr. Alexander’s illness was discovered- it was the common E. coli- they never did figure out how it managed to get into his brain and spinal cord fluid. Nor did they figure out how he survived it when his neocortex was shut down for days- or how he felt himself to be conscious through out the seven days and had memories of being in heaven during that time. He is convinced that his survival and his memories of heaven are proof that God exists, that the soul exists after death, and that his survival was a miracle. There is also the fact that he knew a couple of things that went on while he was in a coma that he shouldn’t have been able to know. He states that God loves us all, and his illness was for a reason.

I’m not automatically against the possible reality of near death experiences – NDEs- but I don’t automatically believe them, either. Alexander’s recovery from his illness was unlikely but there are other cases of people recovering from illness that should have killed them. And we certainly don’t know everything about the brain; neuroscience learns surprising things every day. What happened to the author was remarkable and some aspects are unexplainable at this time, but there is a chance his interpretation is colored by his religious training.

Then there is the problem that some of the things in his book just aren’t true; he took some liberties with the truth here and there. Alexander did not lapse into a coma on his own; because he was delirious and thrashing around to the point he couldn’t be treated, the emergency room doctor put him into a medically induced coma which necessitated putting him on a ventilator. He was kept in that coma, and the doctors periodically tried to bring him out of it, only to find him still delirious; he was never ‘brain dead’. He states that as he was about to be transferred from the emergency room to the ICU, the rallied for a moment and shouted “God help me!”, but the emergency room doctor, a friend and co-worker of the author, says that is impossible because he was already intubated, and with that hose down your throat, you can’t speak. There are a few other examples of dramatic license here and there, but most of them aren’t serious. Do these lapses of verity invalidate the author’s message? I don’t know.

Was the author’s recovery near miraculous? Pretty much. Does his NDE prove life after death? No. Does the fact that he apparently had mental contact with other people, learning things he couldn’t have known prove that *something* science can’t explain yet happened? Possibly; but because I now cannot trust his version of events, I don’t know. I wish he’d put forth the true version of events rather than try and make them more dramatic; his story would have been a lot more convincing then.

The above is an affiliate link. If you click through and buy something, Amazon will give me a few cents. This in no way affects my review.
Posted by Laurie Brown at 2:01 PM