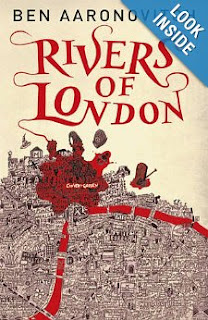 ‘’Rivers of London’ is the first in an urban fantasy series that so far has four books in it, and I look forward to reading those other three. Constable Peter Grant is coming to the end of his probationary period as a new police officer and faced with the prospect of being put on a desk job when a witness to a murder turns out to be a ghost. But that’s not the strangest part; it turns out that the London PD has a special unit for supernatural crimes and goings on. It is staffed by one person, Detective Chief Inspector Thomas Nightingale- and, now, by Constable Grant. Peter is our narrator, and he quickly proved to be someone I’d like to spend time with, listening to him tell stories in a pub.

Up to now, Grant has not believed in anything supernatural. Suddenly he is thrown into a world he’s not noticed before; ghosts, learning magic, spirits of the rivers, a housekeeper who isn’t quite human. He accepts it all with amazing easiness, though. I suppose that’s part of living in a huge city; you get used to running into unusual people and things. When it becomes obvious that the supernatural killer the ghost witnessed is a serial killer things get more complicated. To add to learning magic and solving the crime, Peter must act as liaison between Father Thames and Mother Thames, who are feuding.

I loved how the gods and goddesses of the rivers – the genii locorum - are still in place, even with modern London laid over the ancient landscape. To me, that was even more appealing than the vengeance story that started over a hundred years ago. While the characters aren’t terribly deep- there isn’t much fleshing them out- they are likable and I’m hoping to get to know them better in later volumes. The book is funny and exciting. It would make a great series on the BBC.

The American edition was renamed "Midnight Riot' for some reason.

The above is an affiliate link. If you click through and buy the book, Amazon will give me a few cents. This in no way affects my review.
Posted by Laurie Brown at 9:57 PM