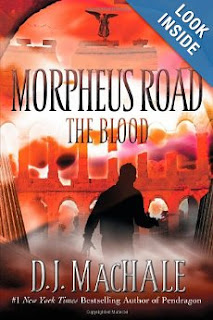 This is the conclusion of the Morpheus Road trilogy, and I’ve been waiting for it eagerly. The author built up an incredible sense of suspense with the first two books. The first book, ‘The Light’, was told from the POV of teenaged Marshall Seaver. The next book, ‘The Black’, the same events were narrated by his lately deceased best friend, Cooper Foley, and we got to see what was happening on the other side of death. In ‘The Blood’, we get a third person viewpoint that brings them together in a tremendous battle for the universe as we know it. Two thousand year old Damon, the person who killed Cooper and is stalking Marshall, is still trying to find the Poleax, a mystical weapon that has been hidden from him. His intent is to rip open the road between heaven and hell, all for the sake of his ego.

The book is an adventure novel, and a coming of age- for the dead Cooper as well as the living Marshall- and a battle between good and evil. But Marshall and Cooper learn that people- even monstrous ones- don’t tend to fit easily into sharp divisions of good and evil, and sometimes you have to make deals that you never thought you would for the good of all.

While ‘The Blood’ was confusing at times (I was wishing it hadn’t been a year since I’d read ‘The Black’), it was very satisfying. Marshall and Cooper make a good team, even if Cooper had a hard time learning to stop mother henning Marshall, and we learn a lot more about some of the other characters introduced earlier. The story is non-stop action. My only complaint was that Sydney, Cooper’s sister, was almost left out of the story. She’s a strong, kick-ass character, and to leave her as the lady in waiting was a disappointment.